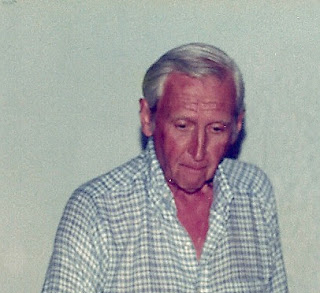 The voice on the other end of the phone was soft and sad.  “He was found lying on the sofa, all dressed in a suite ready to travel, his bags packed.  Classical music was playing.”

My friend of 30 years had gone on his final trip.  “Bon Voyage” I whispered to him and immediately could hear him say his half-scolding “Now Nomi…” in that twinkling drawn out drawl with a slight hint of a giggle at the end -- and I realized how very, very much I would miss him.

Still on the telephone I said, “I think the word ‘gentlemen’ in its literal and figurative meaning was made especially for Vernon Brooks. I have never known such a compassionate and considerate person.”
Wisdom of heart describes Vernon; yes?

Our first meeting flashes before me.  It was 1967 and he was the editor at the Jung Foundation for the Publications Department.  “Department” meant one little room in a drab office suite of three rooms.  I had just been hired to be his secretary and walked into his office full of eager efficiency and a steno pad.  I saw a conservative man in grey suite and tie, neat and sharp-edged in appearance.  I sat on the wooden straight chair adjacent to his desk where he was seated.

He looked at me as if my presence were a surprise to him, raised his eyebrows slightly and said perkily, “Oh! Am I to have a secretary?  Well yes, here you are, sitting with your legs crossed and holding a notepad and pencil.  My.  I guess I’ll have to think of something to say.”  And then pondering for a minute he announced to himself and to the room, “Oh Good!  I’ve always wanted a secretary!

This elfin imp jumping out of the conservative, somewhat southern, well suited man delighted me and I knew then we’d be great friends.

We giggled a lot and often, and just as often shared serious, even sacred, thoughts.  One thought would easily follow on the heels of the other making it all to appear as it truly is; a totality of being.  An illustration:  One night walking on the streets of New York, after attending a film that had us both deep in serious mood and conversation, we suddenly began playing hopscotch on the sidewalk.  We continued the conversation while hopping.  A very natural player Vernon was.  Lively.

Another reminiscence of his humor (for it’s easier to write of that):  The Foundation was re-publishing Esther Harding’s “Women’s Mysteries” and everything was abuzz for some long, labor-filled weeks.  One morning as I arrived in Vernon’s office with pad and efficiency, he looked at me with frozen blue eyes.  “Nomi.  You know Esther’s proofs that we’ve been working on and that need to be sent out to the printer?”  (Of course I did)  “Well, I’ve looked everywhere but pages 15 to 36 are not to be found so I want you to write them.”

I was speechless, frozen momentarily in fear, but finally blurted out, “Vernon!  What are you talking about!?  I can’t write Esther’s book!!”

Cooley and rather disdainfully he drawled, “Why not?  You’re a woman aren’t you?  Isn’t this Women’s Mysteries?  Surely you don’t expect me to write it!”  His face remained severe while his ice blue eyes melted into twinkles.

We happily have left to us his loving imp-irreverence as he poked fun at the Jungian community of 1968 in his written contribution to the Festschrift for Esther Harding’s 80th birthday, “The You and The Not-You, or, Das Du Und Das Nicht Du”.

Vernon, dear friend, others will talk about your good deeds and interesting life that continued to the end to be so full.  I know that like me they will remember how these events were given grace by that combination, so gracefully mingled in you, of serious devotion, deep dedication, and the gift of play.  A soul as good as yours will surely find its rightful place in paradise.